In the second instalment of my Delhi Belly interviews, I bring to you a talent which I’m very excited to be featuring. Vir Das is his name and comedy is his game. Das has a strong background in comedy and was last seen on our screens in Badmaash Company last year. The actor who was dubbed “India’s answer to Jay Leno” by the Indian Express for his comical presence is all set to wow the audiences again in Delhi Belly alongside Imran Khan and Kunaal Roy Kapur. 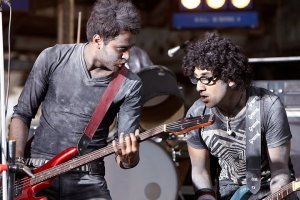 Delhi Belly‘s promos have put across that the movie will include comedy of a nature that Bollywood may not be too familiar with. However, it very much seems as if Das (pictured with Imran Khan) has been cast in a role almost perfect for him and his comedic genius. Not many will be aware that Das was also the scriptwriter for the Filmfare Awards in 2010. Das is also a stand-up comedian whose well-liked shows are known to make their presence felt in various locations within India. It was an absolute honour to talk to Das. Read on as the actor shares a little snippet about himself and his character in Delhi Belly…

With a comical background, how did you find yourself acting in Bollywood films?

I’m an Indian with the Luck of the Irish. Aditya Chopra happened to be given one of my stand-up DVDs by one of his Assistant Directors and Parmeet Sethi, director of Badmaash Company, called me in for a reading to work on the film. Mumbai Salsa happened the same way. Everything that has come has come from comedy.
Most recently appreciated and known for your part in Badmaash Company, would you say you’ve now caught the Bollywood bug?

The Bollywood bug? I don’t know. I think at this point maybe I’m bugging Bollywood because everyone seems to wonder how I got here 🙂 Maybe they wish I would bugger off, but I’m liking where I am 🙂

How were you approached for the role of Arup in Delhi Belly and what appealed to you about the character?

I auditioned 9 times for the film and i think eventually I had been through so many auditions I was the character. What appealed to me was playing raw unabated anger. Arup is an unfortunate, frustrated, dry, caustic and angry young man. Playing something like that is a fun trip. He is the guy in the film whom horrible things just keep happening to. Sometimes its refreshing to not have to create comedy but to just have the comedy happen to you.

Do you believe Delhi Belly will showcase the style of comedy you are known for?

I hope not. I like my films and my stand-up to be completely different. Delhi Belly is a crazy situational comedy whereas my stand up is angry lines and rants. While the audience is the same, who they see on stage and screen should be very very different.

You are also well-known for your stand-up shows which tour the sub-continent. How do you divide your time between those and an acting career?

I don’t sleep much, and I drink a lot of tea. The two seem to strangely complement each other. One doesn’t have to do film after film to pay the bills so I have the freedom to do two films a year instead of four, tour for 7 months in a year and work both creative sides of me. There were days in NYC whilst working on Badmaash Company where I would shoot from 7am to 9pm and be on stage at the comedy club at 11. Often, one gives you the strength to do the other.

Would you want to carve an acting career with a niche in comedy or are you just as likely to take on a more sombre/serious role should it come your way?

My next film RAAKH is my first serious dramatic lead. Its a Tanuja Chandra film set in Bhopal in a small rural family space. Its the toughest thing I’ve done yet and completely out of my zone. Very excited!

The songs of Delhi Belly are creating waves. Which is your personal favourite and which did you have the most fun shooting for?

My favourite is Jaa Chudail, my solo song. I got to dress up in a crazy Elvis-on-drugs outfit and work with Farah Khan. It was amazing. My pelvis is permanently broken, my social life is nil and people on the street see me and start screaming ” chuddaaail chuuddaaiil”.

What do you hope the audiences will love about Delhi Belly?

My bald scalp. I am the skin show of the film! 🙂 At its base, Delhi Belly is a film about three boys and their crazy friendship. I am hoping that’s what people come out with.

Are there any forthcoming films or projects coming up with you in a starry role?

There is RAAKH and I have two films going on floor in the next 8 months. I’m here to stick around as long as the industry will have me.

It seems Delhi Belly is sure to showcase a very different interpretation of Das than one may already have. I wish Das well with Delhi Belly and end with the feeling that this is, quite possibly, one of my most special interviews yet. My excitment for Das’ forthcoming projects continues as I think Delhi Belly will only prove to make the world stand up and take notice of his talent as an actor and his versatility as a comedian.