There are just a few days left until Delhi Belly premieres at the London Indian Film Festival. In the third of four interviews with the 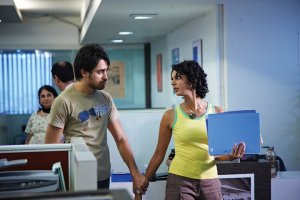 cast of the heavily anticipated movie, I bring to you an actress who is better known in the Western world for her parts in various American TV shows and Hollywood movies. Poorna Jagannathan is no stranger the big or the small screen but Delhi Belly will see her very first exposure to the Bollywood audiences. I had the unique opportunity to speak to this beautiful lady and talented actress about her career (did I mention she is also in a film with the evergreen Jane Fonda?) and her aspirations for Delhi Belly.

Having worked in theatre and film, would you describe your outlook as an artist a little more rounded than someone who has worked in just one or the other?

I think theatre separates the boys from the men. It’s a good idea to work in both.

How did Delhi Belly come to you and describe a little about your character?

I was in India for a wedding and met up with my old friend, Arjun Bhasin, because I desperately needed a blouse. At that time, Arjun was doing costumes for “Delhi Belly” and while we were taking his dog for a walk on Carter road, he suddenly said, “I think I may have something for you”. He called Jim, the producer, and set up an audition. Serendipity really. I had a great audition because the writing was so good. Akshat (the writer) is just a genius. The character fit like a glove and I think the fact that I have the craziest, unruliest hair did 90% of the work.
Tell me a little about your character in Delhi Belly.

Menaka is wild but someone who’s completely comfortable in her own skin. Both I and Imran Khan play journalists and get into all sorts of adventures.

What would you say working on Delhi Belly has taught you and what will you always remember from it when moving on to other projects?

It’s all about being at the right place at the right time. You have to keep at it and keep that creativity alive and when the opportunity comes, you’ll be prepared.

There have been rumours of a kissing scene in the movie between yourself and Imran Khan. There is often a stigma attached to scenes of this nature. What is your view?

I believe you are also working on a movie with the multi-talented Jane Fonda. What is it like working with her?

Jane is a powerhouse. She’s working on a different level. Always engaged, always insightful and so so kind. I fell in love with her. And she’s stunning.

What else can the audiences look forward to seeing you in, particularly Bollywood-wise?

Good question, since I have nothing lined up.

Jagannathan has been branded as Delhi Belly’s best kept secret and if that is to be believed, I am sure that the actress will have projects coming out of her ears once her talent has been witnessed with this, her debut film. I wish her well with her career, be it in Bollywood or Hollywood.