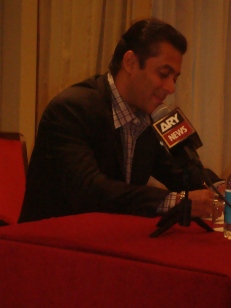 There I was in a room full of eager media personalities eagerly waiting for an actor whose career in Indian cinema spans almost half of his life. Having undergone critical surgery only a week beforehand in the US, Salman Khan was in London to speak about the huge success of his latest offering, Bodyguard. When the handsome superstar finally entered, the room went into silence what with people instantly clicking pictures and a general excitement filling the air. I remember him taking the path behind where I was seated to get to the seat and “desk” ready for him at the front. His manly and familiar “Hi” as he strolled past was enough to signify our wait was well and truly worth it.

Almost immediately after being seated, Khan uttered that he was tired of answering questions about his surgery. He said that the next time he has to undergo surgery he will make sure nobody knows. The actor came across in good spirits and very much ecstatic about the huge success of Bodyguard. When asked about how he felt and whether he expected the film to do quite so well, he said it feels good that people have liked the film and he said it was the script that attracted him to the movie in the first place. A journalist asked about the “power walk” move in the title song of Bodyguard which he does with Katrina Kaif. Khan revealed that, during the shoot of the film, he witnessed someone moving that way in the distance and he went up to him and said “Yeh aapka move toh gaya!”

The highlight of the evening came in the form of a question about UK talent Ash King and how Khan felt about him singing for him in Bodyguard in the song ‘I Love You’. Khan wasn’t aware that Ash King was sitting before him disguised in the press environment. When Khan began answering the question talking as if King was not present, a group of us pointed out that we were in his presence. Khan then looked at King and said “You’re the guy?” King nodded and went up to Khan. They hugged and Khan requested that King sit beside him. King explained how surreal it was for him that he had sung for the actor who he had watched since chil

dhood. There was a mention of Maine Pyar Kiya and the room was filled with cheers. Khan joked that he was about 12 when he acted in the film.

King was requested to sing a few lines of his song in Bodyguard and although initially a little reluctant, he obliged. This, for me, was the highlight of the entire evening. There was Mr Salman Khan sitting next to Ash King singing ‘I Love You’ (View videos at end of post). I kept thinking about the way the song was picturised in the movie with Khan’s funny antics and dancing. I knew that hearing Ash King sing live would always leave me with a beautiful memory. It gave me goose bumps to hear just 2 lines of the song and i distinctly remember Khan’s smile when King had finished singing  and applause filled the room. King then got up saying to Khan, “This is your territory” and made his way back to being disguised in the audience… but not quite as camouflaged as before!

My wonderful friend Rima (www.twitter.com/rimabhatia) asked a question that left Khan pretty much stumped to start with. She, very cleverly, asked him that as he’s played a bodyguard in his latest movie, if he was in the same profession in real life, whose body would be choose to guard. Khan looked around and eventually said that “this is hard”. I was sitting behind Rima and as Khan looked over in our direction, I pointed at her from behind. Khan then said “Oh you want me to say that i will be your bodyguard?” We all laughed. Khan eventually answered that he would choose to guard the body of Katrina Kaif. An interesting answer to say the least!

Talking about his forthcoming Ek Tha Tiger, Khan revealed that the film will begin shooting in Dublin. He said that the title should’ve been “Ek Hai Tiger” because he feels it’s more fitting to him. Khan was also asked about rumours that he will be in a biopic playing the character of Rajnikant. His response to this was “Yeh kya hai?… Kya HAI yeh?” This most definitely should stop those rumour mills in their tracks!

I’ve got to say that this encounter with Salman Khan and Ash King was totally unforgettable. Ash’s voice, Salman’s sense of humour and the somewhat well-behaved London press were a shining example of successful surprises, and respect for an actor who isn’t always portrayed positively in the media. As Rima and myself left the hotel, we felt elated with what the evening had given us and we were both screaming inside with excitement.

Check out the videos to get a feel of Ash King and Salman Khan in the Press Conference:

Ash Kings sings ‘I Love You’ whilst with Salman Khan