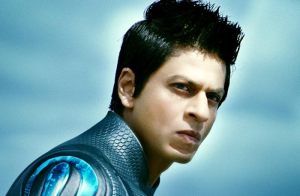 My expectations of Ra.One hit some uncertainty some time ago. I didn’t really know what to expect from a movie which starred and was produced by my ultimate, Shah Rukh Khan. This would be Khan’s first attempt at science fiction and also his first time playing a superhero. It would also be my very first time at watching a movie in 3D. I didn’t know whether to be excited because the buzz of the movie since it’s release has been pretty uneven. I endeavoured not to think too much of this movie, which i had imagined would become a huge phenomenon not only for the Indian film industry but also worldwide on a more international platform. Upon seeing the movie being talked about in the mainstream press in London, I felt proud that it was Khan who was at the forefront of what should be seen as revolutionary cinema in Bollywood. I knew it was a movie I would need to see in order to figure out why it had been giving such mixed verdicts. Instead of a run-of-the-mill review in my usual style, I thought I would break my thoughts down a little…so here goes!

The movie is about a small family consisting of three people; Shekhar (SRK), Sonia (Kareena Kapoor) and their son Prateek (Armaan Verma). Shekhar is a game-developer whose main concern is creating a game which his son would want to play. With the help of Prateek, Shekhar creates characters for a game in which the villain (Ra.One – played by Arjun Rampal) is “cooler” than the good guy (whose persona mirrors Shekhar’s) and programmes the game so that the two aren’t able to kill each other without having their hearts installed. An uncanny encounter takes place when Prateek insists on being the first to play the game and reaches a part of the game not reached before. The film goes on to explore how the characters come to life and how what was once a very ordinary family end up playing the gam

e with their own lives.

What I Loved: The movie surprisingly slips between the real and the unreal with ease. I didn’t expect this to be the case and always found myself questioning how Bollywood would manage what has never been attempted before. I commend the director, Mr Anubhav Sinha, for visuals that are quite simply orgasmic. For me, it was money well spent and leaves an impact even if you don’t like the actual movie; 3D viewing made the story literally come too life.  Kareena looked absolutely gorgeous and SRK shows that he rules the revolution yet again.

What I Hated: Arjun Rampal’s pivotal role was one he did well in but I expected him to be more evil, more durable and on the screen a little bit more. I felt the climax was a little weak what with the villain being defeated in a disapppointing easy fashion when the build up was a lot more intelligent than it should have been.

What I Think Could Have Been Better: Perhaps the chase could have been made a little more elongated and would have added to the ultimate meeting of good and evil. Hand on heart, I can’t think of any other improvements!

What I Thought Was Perfect: The comedy and emotional quota seemed just right. You feel attached to the characters and fascinated by the intricacies of the plot. In short, although perfection

means different things to different viewers, the movie was Hollywood style and this is superb for Bollywood. A takkar was needed and I’m happy SRK was the one to give it!

Ra.One is one of the most innovative and ground-breaking movies I’ve ever seen. I feel the film has gotten mixed reviews because it will not ultimately appeal to the masses. Some groups of audiences around the world will find the film tedious and wonder what the big deal is; I would argue that this would be the feeling the fans in the sub-continent may have. Having said that, the western verdict will arguably be more positive. It’s hard to tell whether this split is quite as clean-cut but I think the film will do a lot better internationally than it will on home territory. I give Ra.One a big thumbs up because there is not much I can pinpoint that I didn’t like about the film.  Hats off to the whole team – may it hail a new genre in Indian cinema!