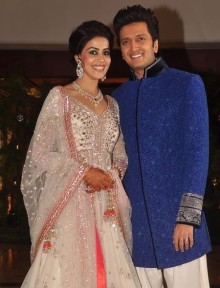 Love. As I typed the word, I felt like there should have been an instant sigh that came after it to signify the way just one simple word and feeling could change anyone’s life. I have to admit, I am a total and utter sucker for a good love story. Those who know me would know this just by the fact that Dil To Pagal Hai has remained my most favourite movie till date. My values are very similar to those that are portrayed by the film’s message but it’s fair to say that those values have matured somewhat since the film’s release and because of my own evolution.

As I sit here sipping on a mug full of cocoa, I can’t help but think about the reel-life stories whose love seaped into real life. Of course, it would be wrong to go on without the mention of Riteish Deshmukh and Genelia D’Souza who tied the knot just two days ago on 3 February. Their love story has gone a long way in inspiring this post of mine. A relationship that was kept well-hidden from the media for a span of nearly 8 years, the newlyweds are visually extremely well-suited to each other. Taking a look back, many may remember Tujhe Meri Kasam which was the film that saw both of them debut together. The film didn’t do too well at the box office but thankfully, the two went on to have somewhat prominent careers in cinema.

With almost 9 years between them, the duo – it seems – are a perfect match in all aspects. From being best friends to lovers, it seems their story couldn’t be more filmi if it tried. However, I am still really surprised by the fact that they kept their relationship covered for so many years. The rumours were doing the rounds at the IIFA Awards last year in Toronto and it amazes me that some people who attended the awards denied them completely. If anyone cared to notice, when Genelia came onto the stage to present an award, it was Shah Rukh Khan’s quite obvious teasing of Riteish which confirmed all suspicions… for me at least!

There have been many tweets to-ing and fro-ing from well-known Bollywood actors and actresses regarding the couple for a few weeks now and each and every one, to my knowledge, speaks of the two as being the sort of couple who raise the bar, so to speak, for lovers everywhere. In reading about their love story on various news sites, the one story that stood out for me was one written by Riteish and Genelia themselves on the Times of India: http://bit.ly/y9mHxD This particular revelation by them about their relationship over the years just goes to show that they are two people who were meant to meet, meant to become close and meant to spend their lives together.

With huge inspiration and warmth in my heart, I wish the two the happiest possible life together. May their love continue to grow and serve as a special living example of a love story that would melt the heart of even the most unromantic person. Congratulations Mr and Mrs Deshmukh!