The almost instant image that comes into my head when thinking about cake-baking is that of a traditional English housewife in her kitchen; creating a true masterpiece filled with love in each sweet creation. Admittedly, this picture is a little sexist and not as fitting in today’s day and age. It is because of this that I am extremely excited to have had the chance to interview someone who breaks all of these myths and more. He doesn’t conform to any traditions and neither do any traditions do justice to the passion, hard work or dedication that is so clearly add to his talent. I feel honoured to have been able to interview a man whose handiwork leaves me salivating… and that too, just from photos. Sunny Bal, of PJR Cupcakes, took some time out to talk to me about his journey, his inspirations and what makes his love for cupcakes so different to everyone else’s…

It’s a little unusual to have a guy so interested in cake… how did you become so fascinated to the point of making a career out of cake-making?

My mother has been making wedding cakes for over a decade, cakes have been the family business for most of my adult life. I always made it very clear  – Men don’t make cakes and there was no chance I would take over the family business!

My story is a long one, but in a nutshell, I moved to California when I was 19. I worked, went to university there, and had the most magical time until I returned in late 2009. I found work as an Employment Consultant, spent 12 hours a day out helping people try and get on their feet. My life was full of early starts, long days and never enough sleep – which i guess is the story for most people living in London. I have always had a passion for art and thought I would one day be a designer of some sort, after studying marketing for so many years, my ideal job would have been as an advertising account executive, liasing with cilents, building relationships and creating masterpieces for them. Two paths unfolded for me during the summer of 2010. On one hand I was offered a job starting at the bottom of a well known advertising magazine, in sales, basically the bottom of the ladder which led to my dream job in advertising accounts. On the other hand, Mum was beginning to get requests for cupcakes which she was refusing, as they are tricky little things and didn’t excite her as much as big bespoke masterpiece cakes did. I felt there was an opportunity there so I asked her to teach me how to make cupcakes. I spent a week destroying the kitchen, trying out every oven we had – the little ones, the industrial ones, the modern and the old. I tried different recipes and wasted A LOT of cupcakes (may they rest in peace).

A client came and asked Mum to make 100 cupcakes. Mum said she would get back to her. I pleaded with her to give me a chance to make these cupcakes but the customer could not know that Mum wasn’t the one baking them. I believed in myself; I was making some seriously great tasting cakes and I have always been good at decorating cakes, ever since I was in my teens helping Mum paint cakes for fun. However, if I had let the client know, she would have run a mile! I stayed up till 7am making those cakes. They were due for collection at 9am.

The cakes were completed. They went, I didn’t get to meet the client as I had passed out from exhaustion! The client came back a few days later to return the cupcake stand. She had a lot to say about those cakes, and every word was like gold to me. As she spoke of how lovely they were, how every last one was eaten, how many of the guests had applauded the cakes and loved the concept of wedding cupcakes, I was clear what path my life would take.

I immediately got my food/safety certificates, handed in my resignation at the Employment Consultant and got down to business. I now have my dream job; meeting clients, building strong relationships, finding out what they want and translating it into cupcake masterpieces. Delivering good service has been the key element drilled into me from my time in the United States and I feel I am now bringing that ethic to my local community. Its not about the money, its about making people happy whilst earning a living. Their happiness comes first and the rewards will follow.

Did you get much slack from your friends about your career choice (even early on)?

Of course, nobody believed I was actually making the cupcakes. They thought Mum was the baker behind them. Slowly as my friends got to know there was some light teasing but all in good fun. At football, I am often referred to as ‘cupcake’, and in many people’s phones I have gone from Sunny to ‘Sunny Cupcakes’. I like it and may even make “cupcake” my middle name (just kidding, my Dad would kill me).

Bespoke cakes always look so divine. Do you have a personal favourite flavour/kind?

My favourites change from time to time. As soon as I discovered my red velvet recipe I fell in love! I wouldn’t eat anything else. I like eating the cake fresh out the oven, whilst I’m testing the cakes. The top is crispy and golden whilst the middle is soft and fluffy – my bliss.

This year, I have tended to reach for the chocolate/vanilla cupcakes. I have my own special way of eating them and thus far, the chocolate and vanilla combo hits the spot.

What would you say are the most memorable or poignant events you have catered for?

Whenever I reach a venue I’ve never been to before, I am excited. I get to see so many wonderful places. I feel I am truly blessed.

I have to say, the one I was most nervous about was actually a very small and simple order; 24 cupcakes to be delivered to Olly Murs at the 02 arena. I thought I would reach the gates, hand them over and head back but I was asked to take them to his dressing room! I didn’t get to meet him personally but I saw him sound-checking on stage. I hope he enjoyed his cupcakes. He seems like a top guy. 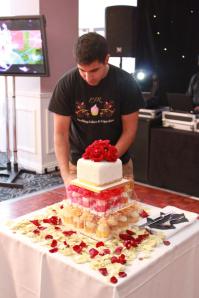 Can you share some of the weird asks you have received from your clients?

Ok well, I am not sure I can even say this, or if you can print it but I get the occasional hen night cupcake order. One thing I’ve learnt is that women are even more insane than men! I thought stag nights were crazy but hens’ really know how to have a good time! I shall say no more about that but I can tell you that I have been recently asked to put male “parts” on my hen cupcakes. I couldn’t do that to my lil babies so did all the other decorations and allowed the client to purchase her own chocolate p*****’s and put them on the cakes once they had left my care. I had a picture sent of the finished product which will haunt me for a very long time.

What is the most extraordinary compliment or criticism you’ve received about your cakes to date?

Wow, so many! Good feedback is like getting an A* on an exam and no matter who its from, it means so much to me as it’s affirmation of a job well done. ‘Better than sex’ is always a good compliment. I feel like Will Smith from the movie Hitch sometimes as I have so many male clients who share cupcakes with their girlfriend(s) and/or girlfriends-to-be. It’s like they have found a secret formula. Alesha Dixon was my first celeb feedback and I was buzzing for a week after it although she was not supposed to be eating cupcakes at that time. That was way over a year ago. My Mum is my biggest critic. She always tells me how bad they look and how they can be better. When she says “Wow” it feels like the cake-Gods have spoken and I have finally done something right. That’s only happened a few times.

What – apart from your delicious cakes and the ingredients within them – makes PJRCupcakes unique as a brand?

PJR has been around for a long time; before the market became saturated with cake makers. We’ve been here before all the discounters, the wheelers and dealers and the guys with the big marketing budgets. We have persevered through one simple promotional technique and that’s word of mouth.

It may sound cliche, but service is always the number one key. Mum is well known now – as is our brand – but I still see her struggling; trying to give the clients more; trying to make their budget stretch. She sees them try to create a dream on a budget and she makes it her duty to make it happen for them. We both have a soft spot when it comes to that, but I believe that is our biggest strength. I can honestly say I have never taken advantage and I have always given more. I can tell you that PJR will always try and get that “wow” from our clients. Our clients become our friends and part of the family. Mum has made wedding cakes years ago for the same people for who I’m now baking children’s birthday cupcakes. Service and quality. Simple.

Do you ever get sick at the sight of cakes?

We are launching our Wedding Favours very shortly; offering something for all budgets. We get so many requests to produce more products so we may look into other desserts. I want to see my cupcakes being enjoyed by EVERYONE but we are a family-run business. We belong to our community and we do not wish to become a huge faceless organisation. On average, we donate cupcakes to help raise money for charities about once a week. I knew when I came back from America, I would help the local community and my dream is to be able to help the youth who are struggling in bad society and make them see that there is always hope. I want to show them that if I can do it then anyone can do it. I hope to become successful and to share that success with kids who need guidance. I don’t think people are shown enough opportunities in this country and talent seems to be hidden and not celebrated. It is for this reason that I hope PJR can not only become successful, but can also share that success.

Well, I don’t know about you but if you’ve read this far and you’re not inspired and in awe then there must be something wrong with you. I’d like to say a huge thanks to Sunny for letting me interview him and for sharing his quite obvious appetite for the success of PJR. I wish him and the company all the very best and may they continue with the warmth that Sunny most definitely portrays. It’s difficult not to be impressed with his enthusiasm and the spark that is in his heart.