London and many other parts of the UK have been hit with some pretty heavy snowfall. There is a possibility I myself may just be snowed in (I haven’t looked out of the window in a few hours!) so I thought why not do something constructive and bring to you my favourite Bollywood snow songs. Bollywood has almost always been known for the extreme when shooting in such weather conditions where the hero is wearing the warmest jumpers and jackets and wrapped in scarves, etc but where the heroine still looks good in a shiffon saree or sleeveless dress. Yes, in case you have always wondered, the heroines are usually the ones who have to endure freezing temperatures just to make a song or scene look iconic on screen.

They are in no particular order but they are my best… I hope you enjoy!

Humko Humise Churaalo – Mohabbatein (2000)
Yes, the first in my choice just had to be a Shah Rukh Khan song and what a beautiful song it is at that. Starring pretty much the whole cast of the movie, Humko Humise Churaalo is a very romantic number which mostly features Khan and Aishwarya Rai Bachchan. The various couples are seen together at various outdoor locations and there is two instances where snow is in the surroundings. In fitting with the above, Khan is seen wearing polo necks and jumpers where Rai Bachchan adorns a netted saree and suit respectively. The white backdrop adds the perfect dose of romance to the song.

Hum Yaar Hai Tumhare – Haan Maine Bhi Pyaar Kiya (2002)
The then real-life couple were in this movie; Abhishek Bachchan and Karisma Kapoor. In a song that would make it onto my all-time favourite list, the two look brilliant together in one version of the title track which is filmed with a snowy background. In my opinion, their chemistry may have not translated as it should have on the screen but this is undoubtedly the perfect romantic song for singing when surrounded by the white stuff!

Karvate Badalte Rahe – Aap Ki Kasam (1974)
This golden oldie simply could not be missed from this list. This is yet another all-time favourite of mine starring Rajesh Khanna and Mumtaz – one of that era’s most loved and popular pairs. The title song of the movie – for once – has both actors dressed for the weather as they ‘canoodle’ and sing to their heart’s content in the snow. There is much love in this song and it is also melodious enough to stick in your head if you’re lucky!

Kismat Se Tum – Pukar (2000)
I remember watching the making of this song where Madhuri Dixit was shivering in a beautiful saree whereas Anil Kapoor was fully wrapped up. In every break, Dixit was given a thick shawl to put around her and a warm drink. She said that this showed that films are not as glam as the fans may think. Undoubtedly another beautifully shot song with lyrics that touch the heart – this one definitely is one of the best snow songs.

Tu Mere Saamne – Darr (1993)
It’s back to SRK again with this Yash Chopra classic in which he features with the beautiful Juhi Chawla. In a film that sees him in a negative role, this song is a little on the sweet and lovey dovey side but borderline freaky. SRK’s stalker streak is almost visible and the tune is a little haunting. Nonetheless, this is one song that makes my snow list even though I’m not a fan of Chawla’s jumper in the snowy scene! 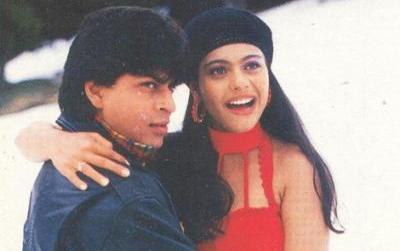 Yahoo – Junglee (1961)
Where does one start with one of the most iconic snow songs of all time? Shammi Kapoor and his very active jumpy antics and the gorgeous Saira Banu’s delicate persona. The famous ‘Yahoo’ scream adds to the excited feel of the song and makes you want to jump about in the snow yourself. Without this song, the list would be totally incomplete.

Zara Sa Jhoom Lu Main – Dilwale Dulhania Le Jayenge (1995)
Once again, SRK strikes in yet another snow song and this time with some alcohol to accompany. His legendary pairing with Kajol make this song extra special as does her character’s tipsy-ness. The snow part sees a fire lit and Kajol wearing a sleeveless red dress and dancing with SRK as if she’s all to familiar with him… although in reality the story is very different.

The chemistry in this song between Rishi Kapoor and Neetu Singh (Kapoor) is what makes it such a pleasurable watch. From the Yash Chopra classic, Kabhi Kabhie, it is only expected that one song would be filmed in the snow. The couple are cute and the song is a catchy one. Easily one of the best songs for this jodi and in a film packed to the rim with romance.

I hope you enjoyed reading this post as much as I enjoyed watching some of my fave songs all over again. The snow is still falling… I am still reminiscing… and I hope you will now do the same!