2020 has been one of those years where I’ve had enough time at home to be able to watch so much of what was on offer. This wasn’t only limited to films and web-series but also mainstream TV offerings. There’s been so much content to gorge on that I have felt very spoilt for choice. As such, I wanted to take the opportunity to share some of the things that I spent my time watching this year which I would recommend, for anyone who may not have got the chance to do so. 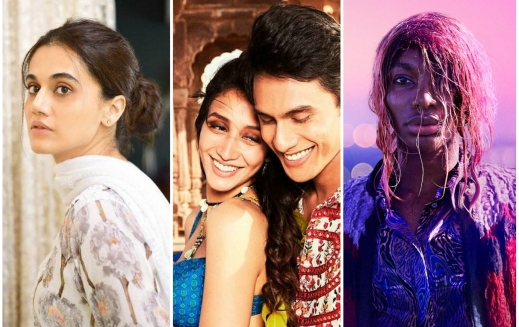 Films
I’ve got to be honest in saying that I’ve watched more Bollywood films than English ones but there have been topics and such that have had a real impact on me as a viewer. Here’s my list of three must-see films this year which I would definitely take some time to watch if you haven’t already. And on online platforms, you can add subtitles or change the audio language if you don’t understand the original.

Thappad was a film which I watched twice in the cinema and it was in fact the second time I watched it was my last time going to the cinema before the lockdown came in. The first time I watched it, I felt like the concept of the story really made me enraged. I felt like the protagonist Amrita (played so so well by Taapsee Pannu) just wasn’t really being heard or listened to. I related to that as an Indian woman and I just had to go and see it again. The second time, I knew what was coming but it made me focus more on the ensemble cast – particularly the males. It was an eye-opening film for me in so many ways. This film is available to watch on Amazon Prime.

Yeh Ballet is a Netflix Original film about two under-privileged young people who defy the odds and go on to achieve their dancing dreams. You know when you know the film’s about an underdog, you prepare yourself a little for a coming-of-age film which might have a few life lessons along the way. Yeh Ballet is that and much more. I can’t recommend this one enough. It’s the emotional rollercoaster I didn’t expect and I would highly recommend it if you haven’t seen it already.

Kaamyaab may not be fronted by a current generation actor but it’s a topic that every person can relate to. It’s a film, with Sanjai Mishra as protagonist, that teaches you to appreciate the arts. However, it also portrays how important it is to understand that a lead part in a film or play isn’t the most significant. Mishra plays a retired actor who wants to make a comeback to reach a milestone in his career. It’s truly heart-touching and really makes you think. If you haven’t seen it yet, it’s streaming on Netflix now.

Web-series
I’ve seen many many web-series this year and one would think it’d be difficult to pick just three but it actually isn’t. There are three that stood out for me so here goes.

Bandish Bandits is up there as my favourite web-series this year, no contest. This was one I resisted watching because I wasn’t sure it was for me. But right from the first episode I was proved wrong! Rithwik Bhowik and Shreya Chaudhary are so great together as Radhe and Tamanna and couldn’t have been more perfect. Their chemistry was fabulous and the rest of the cast – including Naseeruddin Shah and Rajesh Tailang – were all applauseworthy too. This is one I will probably watch again at some point and it’s streaming on Amazon Prime if you want to give it a go!

Little Fires Everywhere, starring Reese Witherspoon and Kerry Washington, is one of my favourites this year as well. They both play mothers from different socio-economic backgrounds and how this has shaped theirs and their children’s lives and continues to do so is played on extremely well during this series. It’s a very interesting take set in the 1990s of the differences between two families and it will keep you engaged, particularly because of it’s stellar performances.

Never Have I Ever was a little ground-breaking and although I had my own issues with some of the characters and regressive thoughts, it was a series I enjoyed. It reminded me how much I used to love American teen shows and to have an Indian family as the main characters made me relate to it even more than I usually would and I’m sure others would have found the same. If you haven’t seen it yet, what are you waiting for? It’s on Netflix now!

TV shows
I’ve watched quite a lot of things this year, and I think sometimes we mock TV as being not to the same standard as online but I think it really has been this year! Here’s my personal best of the best.

I May Destroy You, which was aired on the BBC and is available on BBC iPlayer, absolutely mesmerised me like no other show ever has. I was so consumed by Michaela Coel’s character and how she’d written the show and the role. I was so taken in by it all and I really didn’t expect to be. It’s one that needs to be watched if you haven’t already. It’s also available on HBO.

Life, also on BBC and BBC iPlayer, is one of the best of this year. I’m so glad I began watching it. It follows intertwining stories of a group of people who live in the same apartment block and that’s all I’m going to give you. I would highly recommend it – it’s a feel-good show but tackles some very real issues too. The characters were so relatable.

Us on ITV is one show I wanted to carry on beyond the four-episodes it was. It’s a family show, showing the real problems between parents and children as well as a married couple whose marriage has lost its spark a little. They travel together and it all unravels so beautifully. A truly heart-warming show which I think would suit any kind of person who wants something light and breezy which leaves you with a warm and fuzzy safe feeling at the end.

There you are! Those are my recommendations for the year’s entertainment. I hope this quick list has given you some solid shows to watch, which you may not have seen already. Do let me know your thoughts!

Much love,
AT x